Yoshiyuki Iwase was born in 1904 in Onjuku, a fishing village east of Tokyo. He studied law in Meiji University in Tokyo. While he was the heir to his family’s sake distillery, he found his inspiration in documenting the traditional life of the people living on the Pacific side of Chiba peninsula. (just West of Tokyo Bay)As a young man, he received a Kodak camera as a gift, and soon after found his passion for primitive beauty of ama and the girls and women who harvested abalone and seaweed by free diving when the tides were favorable and the water temperature was bearable. The ama who continued this ancient tradition of diving became his photographic muses.  Yoshiyuki Iwase’s amazing photographs remain as the final and most comprehensive visual proofs and records of the life of those ama divers. He photographed both the fishermen and the female divers.  He had a series of exceptional modernist nudes and he also documented traditional culture in what was a post-war Japan. Remember, this was the 1950’s. So, what might appear mundane today was quite progressive in it’s day. Also, documenting this fading Japanese lifestyle made him more equivalent to a Japanese Smithsonian photographer. He had many solo exhibitions in Tokyo and elsewhere in his native country. His advancements in the field of photography earned him many awards. His photographs are held in collections in both Tokyo and Onjuku historical museums. 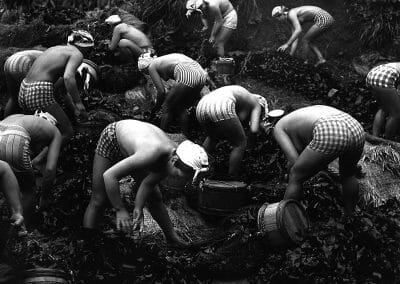