Vincenzo Galdi was an Italian photographer and model who served as one of the “pioneers of the masculine and homo-erotic photography at the turn of the 19th and the 20th century,” alongside Guglielmo Gloeden and Wilhem Von Plüschow. Galdi started as a model for the Naples based photographer Von Plüschow around 1887, later to become his assistant and rumored to be his lover. Plüschow introduced him to the technique of photography and Galdi later opened his own studio at via Sardegna 55 in Rome. Galdi photographed women, but mainly worked with men. He makes beautiful portraits, the shots often take place on his terrace, where we see the wall and plants or a sofa draped with different fabrics, decorated with statues. Erotic photographs such as these were not prevalent in Italy at the end of the nineteenth century, and Galdi was thought to be the first “pornographer” of this time. After 1910, Galdi became a gallery owner at Via Del Babuino in Rome. 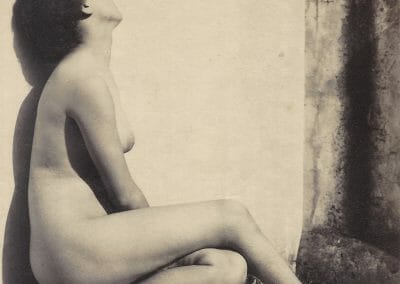