Paul Strand sought to express the feeling of the land and its inhabitants directly, honestly, and with respect. His prints are masterly in detail and tonality, and his approach has greatly influenced American photography. Strand advocated “straight photography,” and photographed street portraits to city scenes, machine forms, and plants with his distinctive clarity, precision, and geometric form. From 1904-09, he studied photography under Lewis Hine at the Ethical Culture School in New York, where he was born. Hine introduced Strand to Alfred Stieglitz, who gave him an exhibition at in 1915, and published his work in the two final issues of Camera Work. Active as both a still photographer and a filmmaker, Strand has been extremely influential. After completing military service as an X-ray technician in the Army Medical Corps, Strand collaborated with Charles Sheeler in 1921 on the short film Manhattan, and from 1923 to 1929, he worked as a freelance cinematographer. For the next several years, he photographed in Maine, Colorado, New Mexico, and Canada. He was the chief of photography and cinematography for the Mexican government’s Department of Fine Arts from 1932 until 1934; he supervised production of the government-sponsored documentary The Wave. In 1935 he traveled with directors of the Group Theatre to Moscow, where he met film director Sergei Eisenstein. Upon his return, he worked on Pare Lorentz’s film The Plough That Broke the Plains for the Resettlement Administration. Strand settled in Orgeval, France, in 1951; there his attention to “the world at his doorstep” shifted to the simple beauty of his garden. He published a series of books on his travels around the world. Strand’s work from this later period is less abstract in style than that of the 1910s and 1920s. 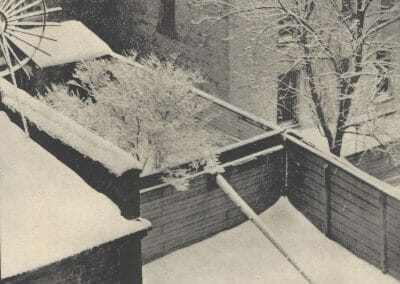