Nadar, whose birth name was Gaspard-Felix Tournachon, was born in Paris in 1820 to a printer and shopkeeper. His parents did not marry until he was six years old and his only brother, Adrian, was one. After his father’s death, Nadar earned his tuition to medical school by writing theater criticism columns for three newspapers. As his interest grew, he gave up medicine for journalism, working for several publications in different capacities including editor and publisher.

In 1839, Gaspard-Felix Tournachon chose a pseudonym as was popular for writers at the time. Changing the last syllable of Tournachon to “dar” (also a popular pun) and dropping the “Tour” he became Nadar. By 1845, he had published the first of 15 books as well as numerous articles. Nadar was also a successful cartoonist and for a short time, a secret agent for the French government.

Nadar became interested in photography as a needed tool to assist in his drawings. He and his brother opened their first portrait studio in 1855; Nadar opened his own studio in the heart of Paris five years later. Nadar was a tall, large man with flaming red hair and a red mustache. Red was his color, and he capitalized on it. The exterior and interior of his studio were red, and consisted of two floors decorated with valuable art and porcelain. His name was written in large red gaslight letters across the front of the building. Nadar wore a resplendent red velvet robe to greet his clients.

Nadar photographed the artists, writers, and musicians of Paris who were also his sphere of friends. His portraits did not speak of his flamboyant appearance or the grandeur of the studio; to the contrary, he tried to be true to the character and image of the client. Nadar’s subjects were posed in relaxed positions with Rembrandt-style lighting, a lighting style still popular today. He was the first to implement electric lighting in his studio.

Nadar photographed the sewers and the catacombs of Paris and was first to produce aerial photographs from a balloon. The photographs provided the first opportunity for man to view the landscape from an aerial perspective. Nadar believed in and campaigned for the advancement of aeronautics. In 1863, his studio became the home of The Society for the Encouragement of Aerial Locomotion by means of Heavier-than-Air Machines. Jules Verne was secretary and Nadar was honorary president. Napoleon III requested Nadar to take aerial photographs for the French government during the war against Italy, but for political reasons he refused. Later in 1870, during a war with Prussia, Nadar helped break a blockade of Paris by carrying mail by air balloon from Paris to Normandy. Thus began the world’s first airmail service.

Nadar is not only an important figure in the history of photography and aviation, but also in the history of painting. He held the first impressionist exhibition in his Studio in 1874, providing a forum for the controversial art of Manet, Monet, Renoir, Degas, Cezanne, Pissarro, Sisley, Boudin and others. During his lifetime he championed and hosted exhibitions for many painters whose work he believed in.

Nadar interviewed Michel-Eugene Chevreul on the French scientist’s one-hundredth birthday. Nadar’s son Paul took the photographs. The photographs were printed consecutively with captions beneath each, in a double-page spread by the Journal Illustre on September 5, 1886. A composition of Nadar’s love of journalism and his knowledge of photography had created the first “photo-interview.” 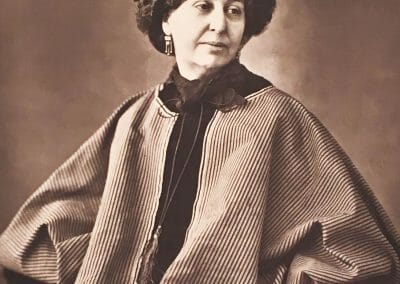