Marion Wolcott is known for her candid documentary photographs taken for the Farm Security Administration (FSA) during America’s Great Depression. Joining Dorothea Lange, Walker Evans, and other photographers who created iconic images for the FSA, Wolcott documented America’s staggering wealth inequalities, its race relations, the poverty and deprivation experienced during the Depression, and the benefits to the population of federal subsidies and programs. “As an FSA documentary photographer, I was committed to changing the attitudes of people by familiarizing America with the plight of the underprivileged, especially in rural America,” she once said. Along with images of coal miners, farmers harvesting tobacco fields, and affluent spectators at the races, Wolcott also captured moments of transcendence, such as in Jitterbugging (1939), an iconic image of African-Americans dancing in a club. 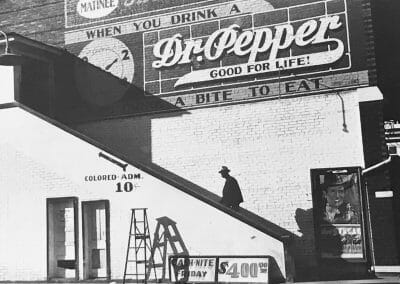