Marc Riboud became interested in photography in 1937, when he took his first photographs with his father’s Vest Pocket Kodak camera. It was not until 1953, however, that he became a full-time photographer. During the intervening years, Riboud studied engineering and fought for the French Resistance in World War II, earning the Croix de Guerre in 1945. After meeting Henri Cartier-Bresson, Robert Capa, and Chim (David Seymour) in Paris in 1951, he left his job as a research engineer to make a living through photography. He worked free-lance until in 1953 he was invited to join Magnum, the co-operative photographic agency founded by Cartier-Bresson, Capa, Chim, and George Rodger. Through Magnum, he traveled to Asia and Eastern Europe several times and gained recognition as a specialist in documenting Asian cultures. Riboud was a very active member of Magnum, in terms of his photographic production and his official capacity, as vice-president, president, and chairman of the board. Riboud retired in 1979, but the agency maintains his archives. He continues to photograph, most recently, devoting his energy to pursuing personal projects. Riboud is known particularly for his photographs of the Cultural Revolution in China and of the Vietnam War. His ability to communicate with sensitivity the experience of daily life under extreme political circumstances has been widely celebrated, and his images have served many as touchstones for those times. Riboud’s pictures from China and Vietnam have been published in Three Banners of China (1966), The Face of North Viet Nam (1972), Visions of China (1980), and Marc Riboud In China: Forty Years of Photography (1996). His work has been the subject of exhibitions at ICP in 1975, 1988, and 1996. 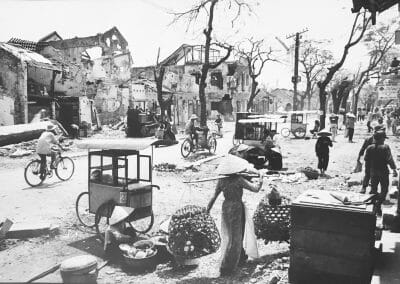