Jan Saudek is considered a leading Czech photographer, best known for his depictions of nudes and youthful figures arranged in dreamlike spaces. His compositions evoke the dramatic tableaus of early photography, with subjects artificially posed in front of the viewer. A survivor of World War II, many of Saudek’s family members died in concentration camps, and photography became a means to cope with haunting childhood memories. For many years, Saudek’s work stayed underground in Prague as it would have received the attention of the secret police for its depiction of nudity and overt eroticism; at the time, such artistic expression was banned by the Communist leaders. Even with these restrictions in place, Saudek became well known in the West and eventually within his own country. His work has been exhibited at the Centre Georges Pompidou in Paris, The Art Institute of Chicago, the Metropolitan Museum of Art in New York, NY, and the Getty in Los Angeles, CA. 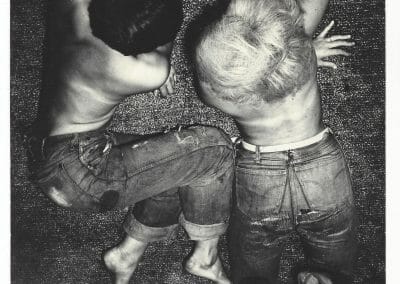