With versatility and resourcefulness, Coster moved seamlessly between different photographic genres and had a long career in advertising, industrial photography, and photojournalism. In the 1920s, Coster moved to New York where he landed a job photographing for the prestigious Underwood & Underwood studios headed by Lejaren Hiller. Coster secured his place in the field by creating innovative photo-illustration for advertising and industry. His pictures appeared in newspapers, magazines and catalogs selling everything from household appliances to fashion, cosmetics and food. Coster relocated to Chicago in 1930, where he founded a mid-western branch of Underwood & Underwood Studios. He opened his own studio in Chicago in 1936 where he did much of the photography for Marshall Field Company and other large Chicago institutions. His experiments during the greater part of the 1930s gradually shifted his focus towards journalism. His early social documentary photographs of labor strife and civil rights issues reflected a personal and emotional dedication to the concerns and welfare of his fellow man. Some of his more extensive projects are dedicated to the American life of the mid-west. During the Second World War Coster photographed the impact of combaton the home front. Moholy-Nagy offered Coster an opportunity to lecture on documentary photography to the students of the Institute of Design in Chicago during the 1946 “New Vision in Photography” seminar. He continued to lecture in 1950-51 and again in 1960, focusing his classes on socially oriented themes.Starting in the late 1940s, he freelanced for Time, Fortune, Holiday, Ladies Home Journal and Scientific American. He ceased making photographs in 1964 and eventually retired in 1982. Gordon Coster left his mark on the world of photography in a successful lifelong career that paralleled the changing face of the medium in the first half of the twentieth century. 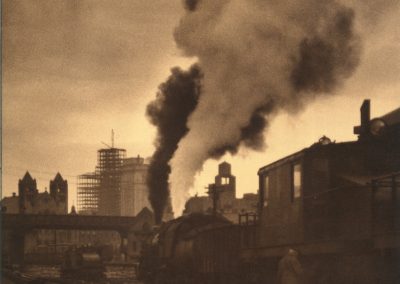