Eugene Harris grew up in Minnesota and received a Bachelor of Education degree in 1937 from the State Teachers’ College in Moorhead, MN. He joined the Foreign Services in 1944 and became the Asst. Agricultural Attache in Buenos Aires, Argentina in 1948. He traveled a lot  taking thousands of photographs along the way. He left Foreign Service in 1953 to become a full-time photographer. In 1954-1955 he took the famous photograph of the “Peruvian Boy with Flute” that would become one of the best known images of the “The Family of Man” exhibition as it was reproduced on the cover of of MoMA’s book and widely published elsewhere. From 1954-1964 he was Chief Geography Photographer for the Silver Burdett Publishing Company. On this assignment, he accompanied textbook author Dr. Clarence W. Sorensen and photographed worldwide with many of his images incorporated in Dr. Sorensen’s textbooks. 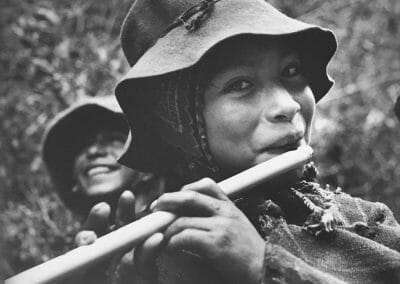