Earlie Hudnall was born and raised in Hattiesburg, Mississippi. His sense of community within his family and that of the African-American culture is what helped shape his work as an artist. Hudnall started photographing while serving as a Marine in the Vietnam War in the 1960’s. In 1968, he moved to Houston to attend Texas Southern University and received his BA in Art Education. There he found the encouragement to continue photographing his subject matter of the everyday for African-Americans in the South. Houston became his permanent home and has been working as the university photographer at Texas Southern University since 1990. Hudnall is a board member for the Houston Center for Photography and an Executive Board member in the Texas Photographic Society. His work has been influential in the portrayal of the African-American community and culture. The cinematographer, James Laxton, of Academy Award winner for Best Picture in 2017, Moonlight, mentioned Hudnall as visual inspiration on how the film should depict African-Americans both aesthetically and symbolically. His photographs are included in many notable public and private collections across America, including the Smithsonian, Art Institute of Chicago and the Museum of Fine Arts in Houston. 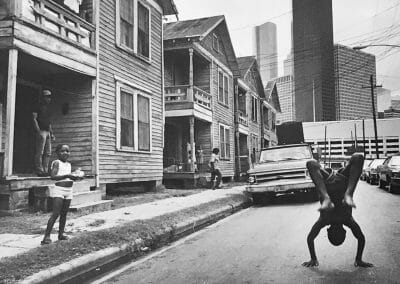