Carlotta Corpron was born in Blue Earth, Minnesota, but spent fifteen years of her youth in India. She then returned to the United States in 1920 to earn degrees in art education at Michigan State Normal College and Columbia University, and was first introduced to photography in 1933. Her interest grew out of her desire to create close-up images of natural forms for use in art and design courses, and her vision was influenced by László Moholy-Nagy, and further shaped by her friendship with Gyorgy Kepes, who included her in his book The Language of Vision (1944). Of particular note are Corpron’s early light drawings, made by tracking moving light at amusement parks–radiant images of wild edges and rhythmic lines–and her “space compositions,” which employed eggs and shells, although their real subject is the constructed space in which they exist. This space, achieved by the use of light-reflecting surfaces, often seems to reproduce the perceptual distortions of underwater realms. Corpron  made “fluid light designs” examining reflections on plastic materials; “light follows form” studies of sculpture; abstractions of light flowing through glass; and solarizations of flowers and portraits. She retired from teaching in 1968 but continued printing her earlier work. Corpron’s photographs were shown at the Museum of Modern Art and the Art Institute of Chicago, and were displayed in the 1979 ICP exhibition Recollections: Ten Women in Photography. 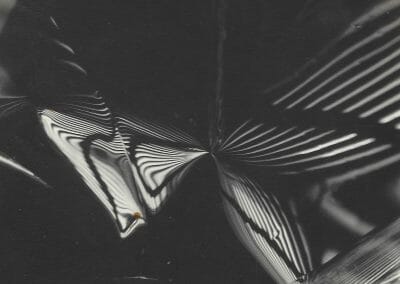 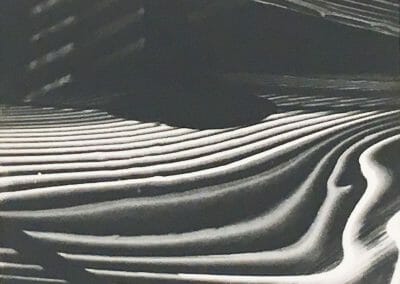