In 1929, Brett and his father moved to Carmel, California where the Weston family, including Brett’s three brothers, would maintain homes for the rest of their lives. At various times, Brett Weston also lived in Los Angeles where he had his own studio and portrait business, and in New York where he was stationed in the army. He later traveled on personal photographic trips to South America, Europe, Japan, Alaska, and Hawaii. Following a 1947 Guggenheim Fellowship which he used to photograph along the East Coast, he moved to Carmel to assist his ailing father, and pursue his fine art work, including wood sculpture that was influenced by his own photographs. Throughout the decades of the 1950s, 1960s, 1970s, and 1980s, Brett Weston’s style changed sharply and was characterized by high contrast, abstract imagery. The subjects he chose were, for the most part, not unlike what interested him early in his career: plant leaves, knotted roots, and tangled kelp. He focused mostly on close-ups and abstracted details, but his prints reflected a preference for high contrast that reduced his subjects to pure form. 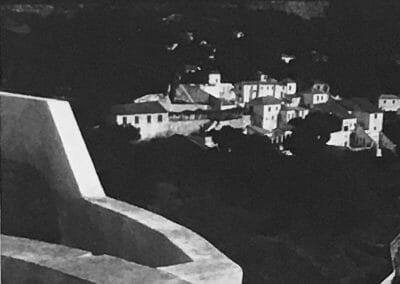