Běla Kolářová belongs to the generation which touched off an iconoclastic revolution and “rearmament” in Czech art during the 1960s. This new wave hit the scene with a program of objective tendencies, proclaiming that art can exist as a process, concept, method, experiment and language, or as something “concrete”—such as a found and designed object. Kolářová’s training is in photography, and her role in the 1960s reversal was associated with this medium from the beginning. As with many of her contemporaries, she concluded that it is not possible to photograph the world, i.e. to use classic methods of representing reality, leading to the invention of her own method and technology – the artificial negative. She pressed small objects into layers of parafin on small pieces of celophane, or she actually applied small fragments of natural and artificial materials. Instead of choosing the world that it is possible to photograph and represent as an exterior appearance, she chose the world that is possible to accept, to appropriate as an assemblage of material fragments, using light to transfer them into an autonomous picture on the sensitive surface of photographic paper. 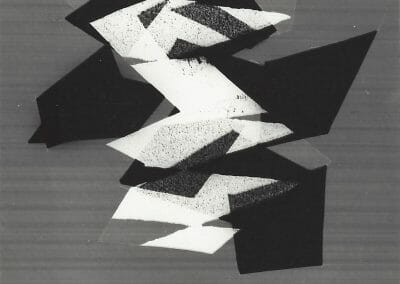