Born in Buffalo, Kansas, Barbara Morgan moved with her family to California shortly after her birth. She studied at UCLA, then became an art teacher. She moved to New York City in 1930 with her husband Willard Morgan. It was only after the birth of a child that she took up photography, a medium that could be practiced quickly and efficiently. Through her photos, Morgan was able to combine a number of her interests: dance, the iconographic power of gesture, and the simultaneity of visual stimuli. Her first book was Martha Graham: Sixteen Dances in Photographs. A decade later came Summer’s Children: A Photographic Cycle of Life at Camp (1951). The dynamic human figure disappears from works done after her husband’s death in 1967, replaced by abstract photograms, photomontages and landscape images that echo her earliest experiments with Russian Constructivist-inspired photographs in the 1930s. While Morgan is best known for her dance photographs, equally characteristic of her diverse work is her ability to capture ephemeral gesture. In the mid-1930s, her choice of abstract photographic styles set her apart from the preponderance of American documentary photographers. Along with Ansel Adams, Beaumont Newhall, Dorothea Lange, and five others, Morgan will be remembered as a co-founder of Aperture magazine in 1951, one of the few publications at the time to nurture a dialogue among photographers and treat photography as a fine art. 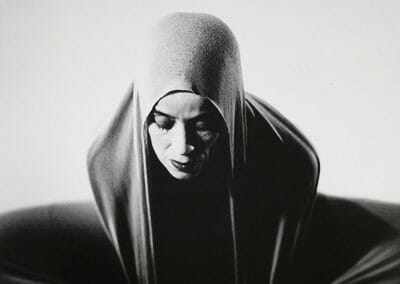